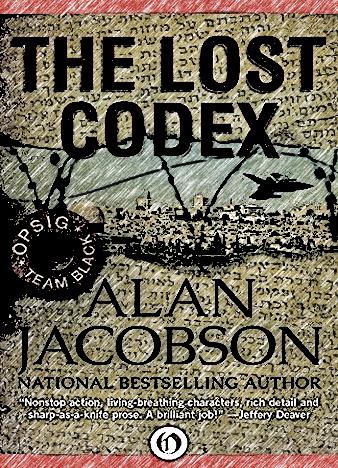 The OPSIG Team Black trilogy is equally gripping, thrilling and engaging. Alan Jacobson, the brilliant author of the series, knows exactly how to keep the readers on their feet and to "hit" them with a new twist every time they think they've got it all figured out. The Lost Codex is the final installment in the franchise, and it's a 100% page-turner, let me tell you that from the very start.

This is a breath-taking novel that mixes ancient prophecies with modern-day tech. Back in 930 CE, a team of scholars writes the very first Bible, giving birth to other influential religions around the world. However, in 1953, more than 6 decades from today, 50% of the pages go missing on the road from Syria. Meanwhile, somewhere in the Dead Sea, a group of unknown operatives steals a centuries-old scroll.

Sixty years later, these ancient documents are the reason for a major geopolitical clash between various governments and radicals that puts the lives of countless people in danger. America is under pressure, and the POTUS gives a top-of-the-line team of trained agents, including operative from FBI and SF, a mission: locate the stolen manuscripts and apprehend - or eliminate - those who launched an unprecedented attack on the United States.

The Lost Codex is a true masterpiece, a modern-day classic. This is a mystery thriller that mixes religion, contemporary wars and ancient legends together and gives the readers a unique experience. If you love outstanding novels that come with action, drama, suspense and twists/turns, make sure to give Alan Jacobson's book a try. It will be your pleasure!

Robert Masello is a world-esteemed, award-winning and bestselling author of fasc...

Looking for that one-of-a-kind mystery thriller to bring some excitement into yo...